On March 9, 2015 in Dammam, Saudi Arabia a sole agency agreement was signed between NTC NEFTEGAZDIAGNOSTIKA LLC and Abdel Hadi Abdullah Al-Qahtani & Sons Company, one of the major private diversified companies occupying an influential position in the regional oil and gas industry of the Kingdom of Saudi Arabia.
The Arabian Peninsula became the fourth nondomestic region where NTC operates along with Kazakhstan, Mexico and Indonesia. By signing the agreement NTC acquires a new partner and extends its business interests geographic reach to the Gulf countries. Al-Qahtani, in its turn, extends the range of offered products and services through engagement of the advanced Russian technologies. 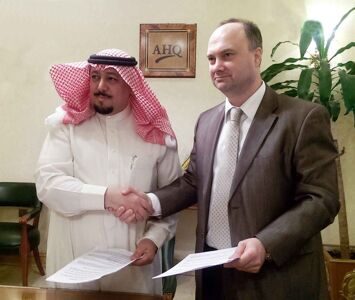 FEEDBACK
BUMI ARMADA
"Bumi Armada Caspian LLC is satisfied with NTC Neftegazdiagnostika LLC performance and services provided during installation of the repair clamps and expresses its gratitude for ability to solve challenging and technically complex issues promptly and at high quality standart."
ROSNEFT
"...The field works were performed within short timeframes and of the highest professional quality; preliminary reports on the diagnostics’ results were also issued in a timely manner."
ROSNEFT
"The inline inspection of sections of the oil pipeline, in-field flow lines performed by “NTC “Neftegazdiagnostika”, LLC was of the highest quality, even though the project was very difficult."
Show all
News
News archive
Clients and partners